Milton Creek is an important site for local wildlife providing habitat for a wide variety of species. One of the most important species found on the site is the Great Crested Newt which is protected under European Law. As part of the restoration of the park new ponds have been constructed to provide a breeding site for this rare amphibian. Milton Creek is also home to large populations of Slow Worm and Common Lizard and small numbers of Grass Snake all of which are protected under UK law. These protected species were all collected and transferred to other parts of the park prior to any work being carried out. Students from the University of Greenwich carried out this valuable work. Areas of the park have been designed to provide suitable habitat for these declining species.

The site is also rich in insect and other invertebrate species. 13 species of butterfly have been recorded on the site including the migratory Clouded Yellow. Glow Worms, actually a type of beetle, can also been found on the site. Females can be seen glowing amongst tall grass on warm August evenings as they attempt to attract a mate.

Several wildflower meadows have been planted specifically to attract the scarce Shrill Carder Bee which is found in the Sittingbourne area but is seriously under threat.

Many bird species can also be found at Milton Creek ranging from the more common species such as the Robin, to the scarcer Stone Chat. The site is also visited by many migratory species including Reed and Sedge Warblers as well as the rare Cetti’s Warbler. Kingfisher can be seen occasionally along Brick Pits Drain and Kestrels regularly hunt over the open grassland. Other birds of prey seen on the site include Sparrow hawk and the diminutive Merlin. From time to time wading birds such as the Oyster Catcher and Redshank visit the site from Milton Creek during periods of high tide.

Mammal species are also regularly seen on the site from the more easily seen rabbits and foxes to the less often seen shrew and vole species. Bats can also be seen on summer evenings feeding over the fishing pond.

Text thanks to Alastair Campbell 2006

The Park is being managed to encourage all sorts of wildlife, one important species being newts. These creatures can also be found in your garden ponds. There are three types of native species of newt here in the UK, you can find an identification chart for newts and other amphibians and reptiles at froglife. 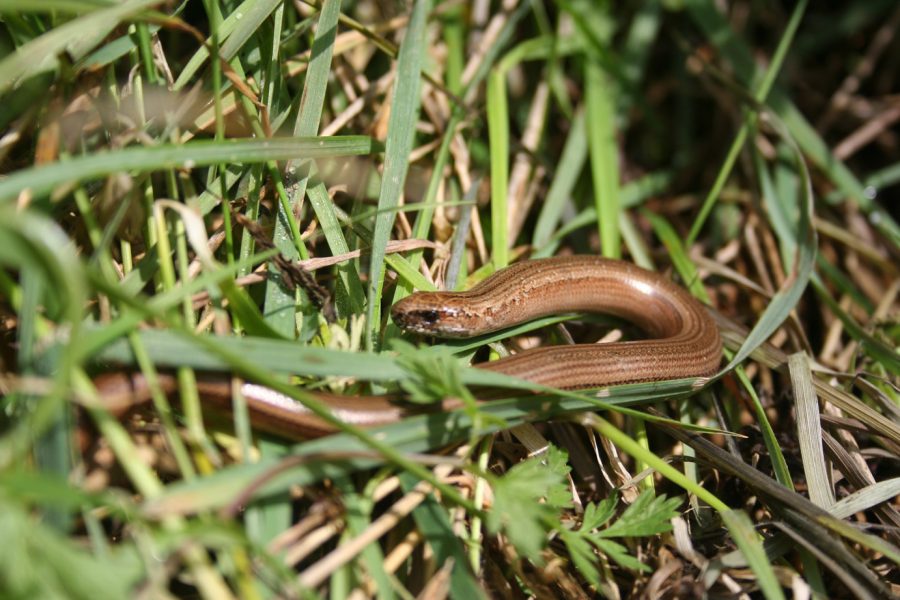 During autumn 2012 volunteers collected grass from recently cut meadows and piled it in containers that they had previously constructed from pallets to create habitats for reptiles. They were rewarded the very next week when two of them spotted a grass snake sunning itself on one of the paths that they had cleared, photos can be seen in our Facebook gallery.

For more information about Reptiles and Amphibians visit KRAG.